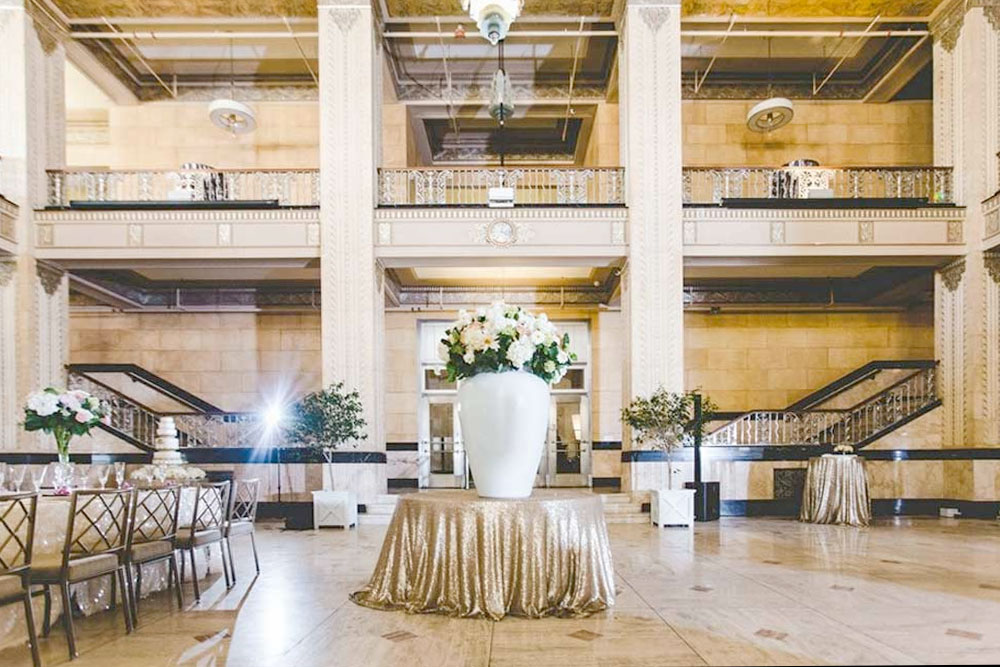 The historic renovation of the Grand Hall at Power & Light was a fast-paced job that was undertaken by KCPL Construction. Although most jobs are not usually rushed, the situation called for a tight deadline, so they call us to set forth to meet the timeframe successfully while still producing top-of-the-line work.

The project at the Grand Hall was over 13,000 square feet. The renovations were set to run from August to October 22. The day after the final day of the projected deadline a wedding was scheduled to take place at the 500-seat wedding and event venue, so it was imperative that all work be complete and meet the expectations laid forth. It was a 1.2 million dollar project, so the scope of the entire restoration was extensive. Click here to view photos of this project.

The Grand Hall at KCPL construction renovation project consisted of the following:

The addition of four restrooms. One was a single bathroom addition on the main level. There was also a men and women’s bathroom located upstairs on the mezzanine level, plus a separate washroom in the women?s bridal suite. The restrooms at the Grand Hall are not typical of modern construction. Instead, they feature a true Gatsby-era inspiration with a strong focus on the rich embroidered wallcovering that is highlighted throughout by marble wainscoting. The rooms also have lush walnut partitions. The black ceiling helps showcase the eye-catching details included in this grand project.

The creation of a 1,000 square foot kitchen that featured a full custom bar. The bar was restored to its pre-Prohibition era time frame. A diamond cut mirror showcased the bar’s solid walnut construction. The workmanship is outlined by concealed lighting and unique aluminum tile which makes it stand out in the room and it remains clearly visible from the street.

Other Additions to The Grand Hall

Bridal Suite: The creation of a newly designed bridal suite.

The restoration process of the Grand Hall was not a typical remodeling project. Each room had to be meticulously recreated so it would be reminiscent of the historic nature and era of the building?s roots from the 1930s. The grand structure boasted custom walnut doors trimmed with rich Corinthian marble, luxurious wall coverings, original vessel sinks with wall mounted faucets plus custom mirrors. The detailed work performed by the crew at KCPL Construction was overseen by architects and a design team.

Through the dedicated work of the various tradesmen that undertook the project, the Grand Hall at KCPL the many other skilled workers, architects and designers, the historic venue site has indeed become the city?s crowning landmark jewel. Upon completion, the opulent Grand Hall was awarded the 2018 CSI Kansas City: Iconic Building on the Historic Registry.

Lets Get Your Project Started